Posted by 32OttawaScouting on November 13, 2017
Our weekend is best summed up by a quote overheard from a conversation between two first year Scouts when we were about half way in on Saturday : "this ain't no cub camp!".  Indeed, it was a challenging self-contained hike-in camp which had us carrying all of our gear 8km in on Saturday, and then back out on Sunday. 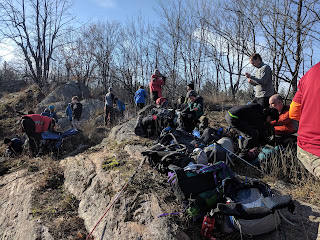 Frontenac Provincial Park is a backwoods-only provincial park with campsites accessible only by canoe or hiking in.  This weekend Scouts completed the second leg of their adventure in this park, a two-part camp where they practiced the "plan, do, review" methodology of the Canadian Path but added their own twist - plan, do, review, do-again.  After the first camp a month ago Scouts examined their gear and food choices to come up with a plan to allow them to accomplish a self-contained hike-in camp deeper into the backwoods of this provincial gem.  We spent several weeks between the two camps going over shelter options, gear options, and food options, and even did a weekend outing where we practiced shelter building.  And finally the next camping weekend was upon us to give us an opportunity to put it all into practice. 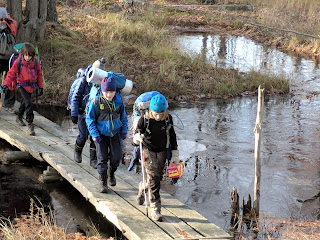 The original plan was to leave at 11am Friday and hike into Cluster 8, then Saturday pack up and hike over to Cluster 10, and finally Sunday pack up and hike back out.  However the weather had different plans - in the week leading up to camp the forecast was showing a major deep-freeze hitting us on Thursday and Friday with temperatures going down to -13C.  With temperatures climbing again on Saturday we decided to delay our departure until 9am Saturday, and then hike directly in to Cluster 10. We arrived around 11:30 at Kingsford Dam at which point Scouters Alan and Rob had to drive an hour down to the park office and back to register, while the rest of the troop set off along the trail in the brisk -5C air.

When Alan and Rob returned an hour behind the troop they set out on the trail and were surprised to find they caught up to the others after only about 45 minutes.  It seems the troop was a bit shell-shocked by the weight of their packs and of the journey ahead, and there was a lot of stopping to adjust gear and change up clothing.  This was not entirely unexpected given it was the troop's very first hike of this nature.  After hobbling along the trail for another kilometer or so like this the Scouters got the idea to start clocking each kilometer with GPS - with one Scouter hiking ahead to the next kilometer mark and stopping, and the troop was only allowed to stop at the designated waypoints.   This system proved to work well and the pace quickened considerably, yet still gave ample breaks to catch our breath and make any required gear or clothing adjustments.    At many of the waypoints the Scouts were reminded of how cold it had been in recent days by the layer of ice on the surface of the lakes and ponds we passed.  And of course where there is ice and Scouts, there are rocks and boulders being hurled to smash holes in the ice! 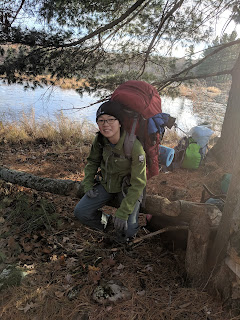 We rolled into our campsite around 3:45 with plenty of time before sundown to set up our shelters.  With shelters set up it was then time to start cooking a very late lunch.  The sun was down by the time we were eating, and after that the Scouts set about gathering wood for campfires.  There was lots of hot chocolate being made as Scouts dug into their individual food caches, and there was even bartering as they traded off snacks and other treats with each other.  Although it had warmed up to about +5C during the hike, it was now back down around 0C and still sinking.  Some of the Scouts had started to retire to their shelters as early as 7pm and slowly more-and-more followed until at 10pm the Scouters sent the last 4 Scouts to bed.  This was followed shortly there-after by a visit to each of the shelters by the Scouters to ensure everyone was properly set up for a chilly night.  There were a few surprises discovered including a Scout sticking out of his sleeping bag from the waist up, another upside-down in his sleeping bag, and one who forgot to store his food bag in the bear box.   Scouters reminded all the Scouts to wake someone up if they were too cold, and with that the Scouters went off to bed as well.

It got down to -3C overnight, and in the morning many Scouts reported having a bit of a chill overnight, but it was not bad enough to wake anyone.  At 5am the first Scouter arose, and it was not until about 6:30 that others started to creep out of their shelters.  By that time it was already just above zero - chilly but not freezing.  Camp fires were lit again as breakfast was made, and we slowly started packing up camp to hit the trail.   It was 11:30 by the time we set off. 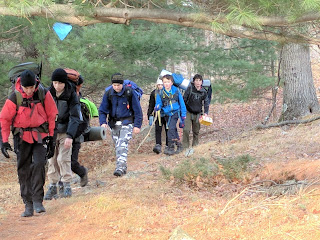 We decided to take a different route back than the one we took in, and also decided upon a plan to stop every kilometer for a break with the first break being a standing-only with packs on, and the second being a sitting break with packs off, and alternating like this at each waypoint.  This plan worked very well at keeping the troop moving at a much better pace than the day before.  By now the Scouts were accustomed to their gear and there was very little difficulty in keeping them moving according to plan.  Around 1pm we crossed a nice stream flowing into Gibson Lake and decided that was an excellent spot to stop for lunch since almost everyone needed boiled water for their dehydrated meals.  We stayed there for just over an hour before setting off again onto the trail. 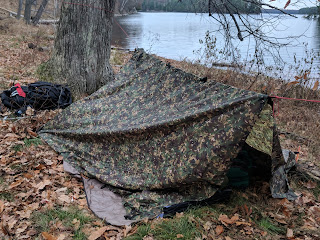 We kept a leisurely pace along the remainder of the route with several long stops at the kilometer waypoints as Scouts and Scouters alike were starting to show signs of weariness toward the end of our journey.  We were back at the vehicles around 3:30pm and hitting the road at 4 just about on the dot.  Just before 6pm we rolled into the arena parking lot to waiting families.

All-in-all it was a fantastic trip even with the 1 day delay due to weather.  Scouts earned a massive badge of honour in completing this camp - it was challenging both physically and mentally.  And Scouters were impressed that the entire trip there was not a single peep of complaint from a Scout about their pack being too heavy or the route being too long or too difficult.  Everyone worked together to motivate each other, and together we got it done! 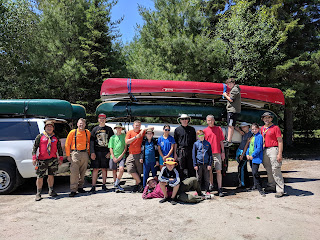 This year’s 5 day canoe trip was Circuit 15 in La Verendrye, a massive nature preserve about 3 hours north of Ottawa that is almost twice as big as Algonquin Park. The 32nd started doing these longer trips almost 10 years ago now because they are more demanding and a greater challenge than the shorter 3 day weekend trips. This allows for a greater opportunity for Scouts to learn about self-reliance and teamwork. The 5 day trip involves packing up camp and paddling every day to a new campsite. This and the longer nature of the trip including portaging really brings out the team spirit in everyone as they all learn to work together. We met at the school at 8:30 am and were packed and on the road by 9. This year there were 11 Scouts and 5 Scouters. With a stop for gas in Maniwaki it was just over 3 hours to get to Le Domaine, the park office. We got ourselves checked in and unloaded, and just after 1:30 we were hitting the water. We had only about 4.5 km to go to our campsite 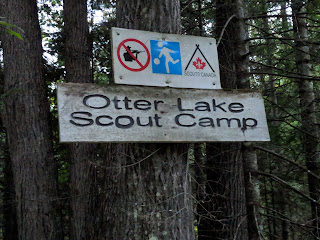 This year's fall camp is come and gone, and all reports are that Cubs had a fabulous time.  This year Cubs returned to Scout Camp Otter Lake which they had not been to since Fall Camp 2013 - so it was a new facility for everyone except Akela.  Hathi was the first leader to arrive Friday evening shortly before 6pm, so she opened the gate and waited about 10 minutes before Akela arrived.  We opened the cottage which is a single room cabin with no electricity nor running water, a small kitchen in one corner with a propane stove and plenty of counter space, a wood stove, and about 24 beds, mostly bunk beds.  Oh and propane lights.  It was not long before Chill arrived, and shortly after that parents started arriving and dropping off their Cubs.  On Friday night we were sleeping in the cabin, and as Cubs arrived they picked their bunk and added to the general commotion and excitement.  Everyone was pretty excited about their first camp of the year and it really showed in the enthusias 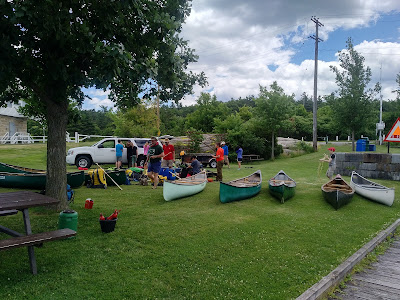 This summer's canoe trip for the 32nd/24th Scouts followed the Rideau Canal system from Kingston Mills to Westport - a change from the last couple of years' backcountry canoe trips in La Vérendrye. 5 leaders and 12 Scouts came along for the adventure. The total distance was about 70km, with more than half in the first 2 days. See the whole route below: Camping at the lock stations is great - $5/person including tax, and lots of flat green grass to pitch tents on. There aren't any showers, but the washrooms are open all night. There's usually potable water - although conditions this year meant that a couple of the stations advised against drinking it without filtering or boiling. We started July 2, and returned July 6.